The Battle of Santa Inés 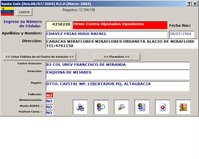 This translation appeared here. The original Spanish version is here.

Article 60. Every person has the right to the protection of her honor, private life, intimacy, image, confidentiality and reputation.

The law will limit the use of informatics to guarantee the honor and the personal and family intimacy of its citizens and the full enjoyment of their rights.

Constitution of the of .

This story is dedicated to millions of Venezuelans of all origins and political tendencies that are enclosed in thousands of unknown computers and whose privacy has been forever violated.

After several years of protests and a sturdy opposition, a signature collection was carried out to call for a Referendum to revoke the mandate of President Hugo Chavez Frias. The Referendum took place on August 2004. The “No”camp, that supported the President, created a command called “Maisanta” in honor of a gomecist general that became an anti-Gomez guerrilla, called Pedro Perez Delgado, nicknamed “Maisanta”, that happened to be the great grandfather of President Chavez Frias.

It is said that the President has a supersticious predilection for his rebellious ancestor and that he thinks that Maisanta brings him luck [1]. Wether true or not, the Maisanta Command had the objective of doing whatever was necessary to avoid that President Chavez Frias be revoked. This political crusade was baptized by the government as the “Batalla de Santa Inés”. It is within that frame that a computer search program coupled with the personal data of all Venezuelan voters, also called “Batalla de Santa Inés”, was created. The name recalls the Santa Inés Battle won by the “llanero” Ezequiel Zamora. The two caudillos, and Maisanta are also related since Maisanta was the son of a ’s colonel. Moreover, both are fetish figures for the President. Thus, it is not by chance that the two characters are associated with one of the most important battles that Chavez would have to fight.

In order to create the Batalla de Santa Inés program, the database containing the information of all Venezuelan voters must have been extracted from the database of the CNE (National Electoral Council), that is the entity in charge of Venezuelan elections. If such was indeed the case, then it would be a flagrant violation of the Venezuelan Constitution that guarantees the right to privacy and that explicitly limits the use of informatics (see article 60 above).

In the following months, the program was used to catalog Venezuelan citizens and, in some cases, to prevent them access to jobs and civil documents [3,4]. I was told that the program with the database could be bought freely in the streets of .

Wanting to verify by myself the length of the violation of the privacy of millions of Venezuelans and in order to understand the program functionality, I installed one copy in my computer and searched for my name, curious to know what information would appear. Later, I started playing with my Venezuelan ID number. Two, three, four, five numbers below, two, three, four, ten numbers ahead…

There they were: Renato, Salvatore, Silvana and Rosetta, those that had been lost in a hidden place of my memory and now, thanks to this powerful program, came back to my recollection of a nine year old girl that is getting her ID card for the first time.

It was a special day. We were transported by bus to the roofed yard of a large school or ID center. I think that it was located in Los Ruices or Los Dos Caminos. We were then seated on long banks, side by side, waiting for our turn. One of our school teachers, Miss Camacho, tried in vain to get us to be quiet. I wanted to seat next to Renato, but Rosetta was between us. That is why his ID number does not follow mine. Renato was in love with Rosetta and all the other girls from the Venezuelan-Italian school I attended were in love with Renato.

It was not the first time that Rosetta got between Renato and me. One or two years before, I should have entered the church with Renato the day of our First Communion. But, because of my or Rosetta’s dress, it did not happen that way.

I wore a white empire dress with a long bridal veil, and Renato was very handsome in a blue suit. He was holding a cream color candle, a silver rosary, a mother-of-pearl missal and white velvety gloves. Rosetta, on the other hand, was wearing an ugly cream color nun’s gown with a wood rosary attached to her waist. That was the gown proposed by the school that I had categorically refused to wear. Then, probably because of the gown, the same professor Bianchi that had always preferred me, decided to put this time Renato with Rosetta as the first couple and left me, with my magnificent bride dress made by my grandma and Salvatore, wearing his brother’s brown suit that was too tight for him, as the last couple to enter the church. That is why in my First Communion picture I am with Salvatore whereas Rosetta was with Renato.

But life is really something. Even though I learned later that Rosetta and Renato had been engaged, they did not end up being together. At least, that is what was indicated by the program. Renato now lives in Colinas de la Trinidad whereas Rosetta still lives in La Carlota. Rosetta must have married a Mr. Añez because the program changes, in the American way, the second family name by the husband’s family name. I also noticed that the program must have been made by people that do not know the letter “ñ” because Añez was written with the numeral symbol, A#ez.

After studying more deeply the program, I got to the conclusion that the union between Renato and Rosetta was not to be, it was impossible, at least politically speaking. They seemed to be real Capuletos and Montescos from . In fact, the program classifies Renato as a “Patriot” and there is a red field that appears on the side of his name, the political tendency field. From what I learned “Patriots” are those that not only did not sign against the President but even signed to revoke the opposition National Assembly members. It seems that after the signature collection to revoke the Presidential mandate, there was a counter-offensive prepared by the goverment to revoke opposition deputies. Interesting, the petition did not seem to target particular deputies but to target them all at large, there are in fact “Patriots” in all the voting districts.

Thus, although Renato is a Patriot, Rosetta is not. She actually signed against the President because when I access her name, a blue light appears indicating just that.

I wonder when was that Renato and Rosetta started moving away from each other. The program does not explain it but it is very clear that they do not live together.

On the other hand, Salvatore, my First Communion companion ,ended up being a very particular type of Patriot because despite being classified as so, there is a warning sign that pops up when I access his name. It indicates that he also signed against the President. I guess that those that wrote the program must consider that Salvatore is not politically trustworthy, that must be the reason for the pop-up. I am not sure I agree with that statement: Salvatore used to not change his mind at all when we played as kids during class breaks. Quite the opposite, he was of a stellar stubbornness.

I started shuffling possibilities. Maybe Salvatore thought that the best way to finish with political instability was to sign to ask for referendums. Then, he must have signed for the first one, to revoke the President, but since he was favorable to the government, decided later to sign the second one as well. However, it is difficult for me to imagine my friend Salvatore using his civil right in such a strategic manner. Maybe he signed first but then he was forced to sign the second petition. The program created doubts in my mind, maybe, maybe, maybe.

Silvana used to live somehow close to my house. But, according to the program, she moved so close that if I lived now in , we would be voting in the same center. When I clicked the center button, I could get the list of every person voting in my center. There was not only Silvana, but also several other known names. There was Maritza, the neighbour from the corner house. I was able to learn her real age, that she had always hidden from us. Then I tried to search for Alberto, her husband, but could not find him in the center. But since his family name was quite unusual, it was easily found using the general name searching feature. To my surprise, I learned that Alberto is much younger than Maritza and that he is a “Patriot” even though Maritza signed against the President. My Capuleto theory does not hold any longer. A Patriot and a revoker living together? What type of fights would they have? Or maybe, maybe it was made on purpose so that all the eggs were not put in the same basket. After all, as they used to say, the vote was secret but the signature was not…maybe, maybe, maybe.

Thus, if I had wanted it, I could have reviewed all my memories, all my friends, all my neighbours, all the members of my family. I could have learned their ID numbers, their age, their personal address, their voting center, and their political tendencies. I could have guessed their fears and presupposed their hesitations.

There are fourteen million people that are now everywhere and that will never be able to recover the tranquility of their anonymity. A collective and permanent violation!

Then, overwhelmed by feelings of astonishment, disgust, displeasure, revulsion, I deleted the program. I tried to get back to the old idea that Rosetta was with Renato and that Maritza was indeed the age she looks. But, it did not work. It was like unlearning how to read after having read.

Then I decided to fired up my computer again and started typing.

And I am still here fighting, in my way, my own Battle of Santa Inés.

In the story above, I have changed the names and sequence of the ID numbers of all my memories. I have also exagerated my curiosity in the search for personal details. I just wanted to demonstrate the potential for meddling in private lives that the program has created. Some of those having ID numbers close to mine happen to be old classmates, but they are not the characters of this story. However, the program is such that it could have been used to search for all my friends’ personal details, had I wanted to.

In fact, and unfortunately for those of us that are listed inside, all the described features of the program are absolutely real.